The crisis faced by the Spanish economy since 2008 has had profound social consequences, which have especially affected disadvantaged groups such as the long-term unemployed. On the other hand, in recent months an important part of media attention has been focused on the events in Catalonia and the political uncertainty associated with them. With the advance of technology we can now follow not only Trump's incendiary tweets but also tragic events both in Spain and beyond our borders almost in real time. In this rather negative social vision that is reflected in the media, it is not surprising that economists are often asked questions that reveal the disbelief in the positive data that the Spanish economy has reported in the last three years, and particularly about its capacity of duration in time.

In the first place, the Consumer Synthetic Indicator recorded in March 2018 a year-on-year increase of 3.6%, similar to the figures registered in January and February, whose figures were in the range of 3.5%. Secondly, the first known data related to this year's retail trade was also positive, such that in January the annual rate of the General Retail Trade Index at constant prices increased by 2.2%, in the corrected seasonal and calendar effects series. The improvement in retail was generalized by both types of goods and modes of distribution. Finally, the indicators of important sectors of the Spanish economy are also positive, as reflected by the number of tourists in January that increased again with respect to the same month of the previous years, reaching 4.1 million tourists; registrations of automobiles in February, up by 13% year-on-year; and the purchase and sale of homes, which increased by 23.1% in January compared to the same month in 2017, thus adding 47,289 operations, its highest figure since May of 2008. 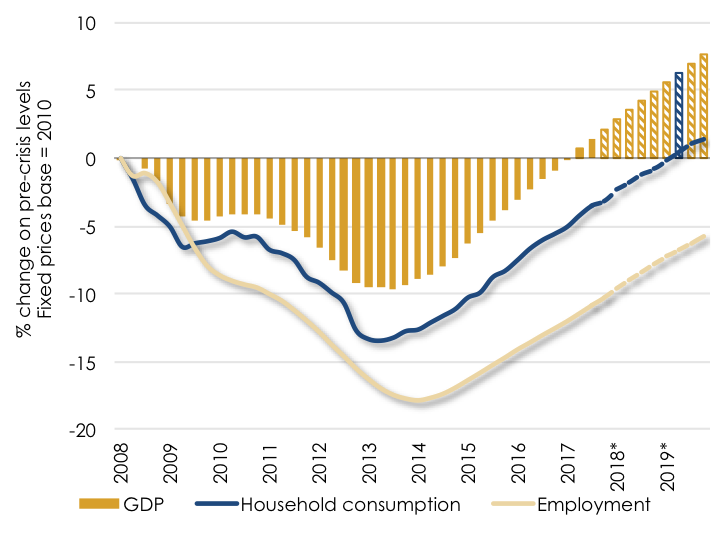