The world economy is facing a synchronized slowdown, with growth at its slowest pace since the global financial crisis. Uncertainty derived from geopolitical and trade disputes is resulting in reduced growth forecasts for the main regions. The slowdown has been especially felt in Europe, but with differences among its main economies. While Germany and Italy have shown a poor economic performance over the last few quarters, France or Spain have proved more resilience. The significant European commercial openness, one of its key traits, is also a double-edged sword, as international trade barriers have a direct negative impact on industrial production.

In Spain, the economy is growing well below previous years, but it will still close 2019 with an annual GDP increase of 2.0% and above the Eurozone average.

After the general elections of November 10th, possible government pacts are being announced, which already generate expectations in the markets and impact the economy. However, in order to rigorously analyze their economic effects, we will have to wait until these become a reality and translate into specific economic, fiscal and budgetary policy measures in the coming weeks and months.

Meanwhile, under this strict condition, at Equipo Económico (Ee) we estimate that Spanish GDP will grow at 1.8% in 2020 and we expect growth to stabilize in 2021 towards its long-term potential rate, at 1.5% (chart 1). Our current estimates imply a downward revision with respect to previous ones. This update is a consequence of the change in methodology applied by INE in the National Accounts, and the recent less dynamic domestic demand due, in part, to the greater uncertainty. 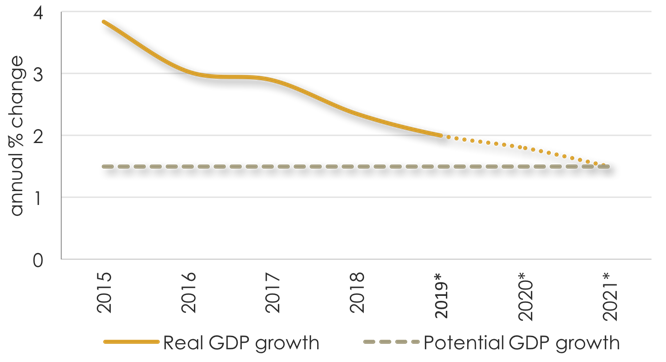 At the end of its economic cycle, the Spanish economy has more balanced growth, between external and domestic demand, than in previous periods of growth slowdown. Additionally, activity growth advances above price levels, contributing to a sound economic performance. Moreover, since 2014 Spain has been able to grow while maintaining a lending capacity towards the rest of the world. In the labor market, job creation continues, but at a slower pace in line with economic activity. Meanwhile, unemployment is still well above pre-crisis levels, particularly among young people and those with a low level of education.

Consumption is the main component of Spanish GDP. Despite private consumption levels starting to slow down at an aggregate level, leading consumption indicators such as retail trade and tourist spending show positive results. The positive evolution of disposable income and household wealth will continue to support consumer consumption in the long run. Nevertheless, uncertainty has contributed to a rebound of the savings rate (chart 2). 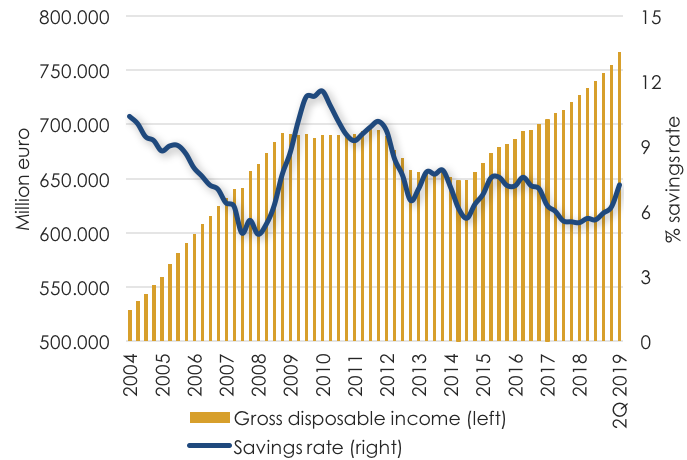 Performance of economic activity is being confronted with increased risks, both international -such the rise of trade protectionism and the Brexit- and national, particularly the uncertainty about the direction of economic policy and the current situation in Catalonia.

These risks grow at a time where, given the stance of ECB monetary policy, there is a reduced margin for action in this area. Moreover, only a few developed countries have room for maneuver from a fiscal perspective. Spain does not seem to be one of them, taking into consideration its levels of public deficit and debt, as well as its external debt. Therefore, the significant effort in terms of fiscal consolidation in past years must continue; Spain is now out of the EU Excessive Deficit Procedure, but unable to approve a new Bill for the General State Budget since 2018, with public revenues growth slowing down.

Experience shows that markets positively reward certainty and stability. Spain is facing a growth slowdown, but unemployment and public debt remain at high levels. Domestic and international risks threaten the baseline scenario of growth stabilizing towards its long-term potential rate, at 1.5%. Therefore, there is a clear need to guarantee a framework of certainty and economic reforms that ensure future generation of activity. This is confronted, however, by the current political reality.