Despite the slowdown in the global economy, the most important indicators of the Spanish economy confirm prolongation of the expansive phase. Spain has now linked together 21 consecutive quarters of year-on-year increases in GDP and maintains a positive growth differential vis-à-vis the euro area (see chart 1) and its most important European partners.

Against this backdrop, at Equipo Económico we foresee an increase in GDP of 2.4% in 2019 and 2.1% in 2020. These figures entail an upward review of two decimals, respectively, in relation to our prior estimates made last May. This indicates a slowdown in the economic cycle’s deceleration.

Inertia in activity continues to be sustained in the reforms implemented in previous years, and again in the historical minimum interest rates. This will enable most economic growth to be determined in the next few quarters by favorable behavior of household consumption, estimated at 2.2% for 2019 and 2.0% for 2020. The investment growth trend will continue to be positive thanks to, among other factors, the low interest rates. Gross formation of fixed capital would stand at 4.1% in 2019 and 3.5% in 2020.

Retro feedback of economic growth and job creation continues. Therefore, we foresee that the unemployment rate will continue to reduce to 13.8% in 2019 and 12.6% in 2020, although labor market progression is also slowing down. Therefore, in June, social security affiliation grew 2.7% year-on-year, clearly below the previous rates of approximately 3.5%.

CHART 1. PERFORMANCE OF GDP IN SPAIN AND THE EURO AREA. 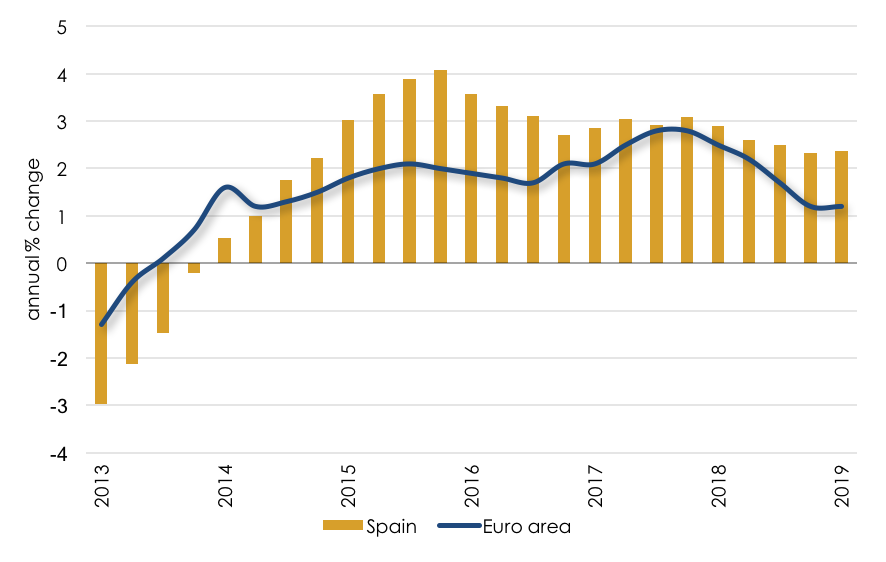 In opposition to the positive performance of the Spanish economy we observe a marked deceleration of the global economy, which has clearly been affected by the materialization of certain risks. During the first semester of 2019 trade tensions have been escalating between the United States and China and, as a domino effect, global protectionist threats have increased. Meanwhile, the risks for Europe are also growing, in line with the increased likelihood of a no deal Brexit.

Due to the more complex international backdrop, the contribution of the foreign sector will be modest. In fact, sectors most exposed to the international scene, such as industrial, and especially the automotive sector, are being affected by a reduction in their activity at an intense pace. Therefore, vehicles production fell between January and May by 5.6% year-on-year.

Increased global uncertainty is also driving the debate on margins and capacity of action of economic policy in the face of future crisis. In a context of negative interest rates and considering that fiscal expansion may not be the answer in those highly indebted societies, the solution must be driving supply-side policies forward. This would mean implementing structural reforms that increase potential growth and make economies more resistant to external shocks.

Nationally, the lack of action in terms of reforms implemented at least since 2016, given the Spanish parliamentary fragility and increased uncertainty, entail a high cost for the Spanish economy in terms of lower income, consumption and investment. Therefore, the possibility of GDP growth in the medium and long-term and the capacity to tackle major challenges such as the still high unemployment rate, sustainability of the pension system in light of the demographic crisis, high public debt and maintaining a current account surplus is limited.

Experience reveals that structural reforms are mostly implemented during periods of crisis, as was clearly the case of Spain in 2011-2014. Perhaps along these lines, major risks for the European and global economy entailed by Brexit and the trade war, can become new catalysts to facilitate adoption of much needed reforms in the European and also the Spanish economy. Given the risks and challenges, inclusive growth can only be sustained in the medium term in Spain if we have certainty and structural reforms.