The world economy continues to tackle the severe crisis caused by Covid-19. After lifting the toughest containment measures adopted in many countries during the first half of the year, the economic recovery remains patchy and incomplete. It must face up to the structural changes triggered by the pandemic and the significant uncertainty associated with its healthcare evolution.

The crisis has instigated a dramatic fall in activity in Europe, with a heterogeneous impact between countries. Unlike in the past crisis, there has been a rapid reaction from the monetary policy side, through the adoption of unconventional measures. As a result, risk premiums in the euro zone have been significantly reduced. However, European stock markets show an uneven recovery. From the fiscal policy side, countries have adopted important stimulus packages, although they differ in terms of size and degree of success. It must be noted that, for the first time in its history, the EU will borrow from capital markets to finance expenditures throughout the Union, within the Next Generation EU program. However, European countries will only fully recover if their vastly increased debts are properly invested in support of sustainable economic growth.

The pandemic has plummeted the Spanish economy harder than the rest of its European partners, as shown by the latest figures on contraction of GDP and employment destruction during the second quarter of this year. Moreover, it has affected certain sectors more intensely, such as tourism, the automotive industry, and retail commerce. Meanwhile, the recovery of activity in the weeks following the end of the confinement has not shown the expected drive during the summer. The devastating tourist season over the summer has slowed the pace of employment recovery, whose destruction has clear knock-on effects on other productive sectors.

Against this backdrop, Equipo Económico (Ee) has revised its GDP forecast for this year two points downwards. We now estimate that the drop in GDP will reach -12.0% in 2020, while the recovery we expect for 2021 will be insufficient to attain pre-crisis production levels, with a GDP rebound of 6.8% (see table 1).

The foreign sector has traditionally made a positive contribution in supporting our economy’s recovery during past crises. Conversely, the global nature of this recession makes it hard to determine what the alternative growth vectors of the Spanish economy could be in coming years. 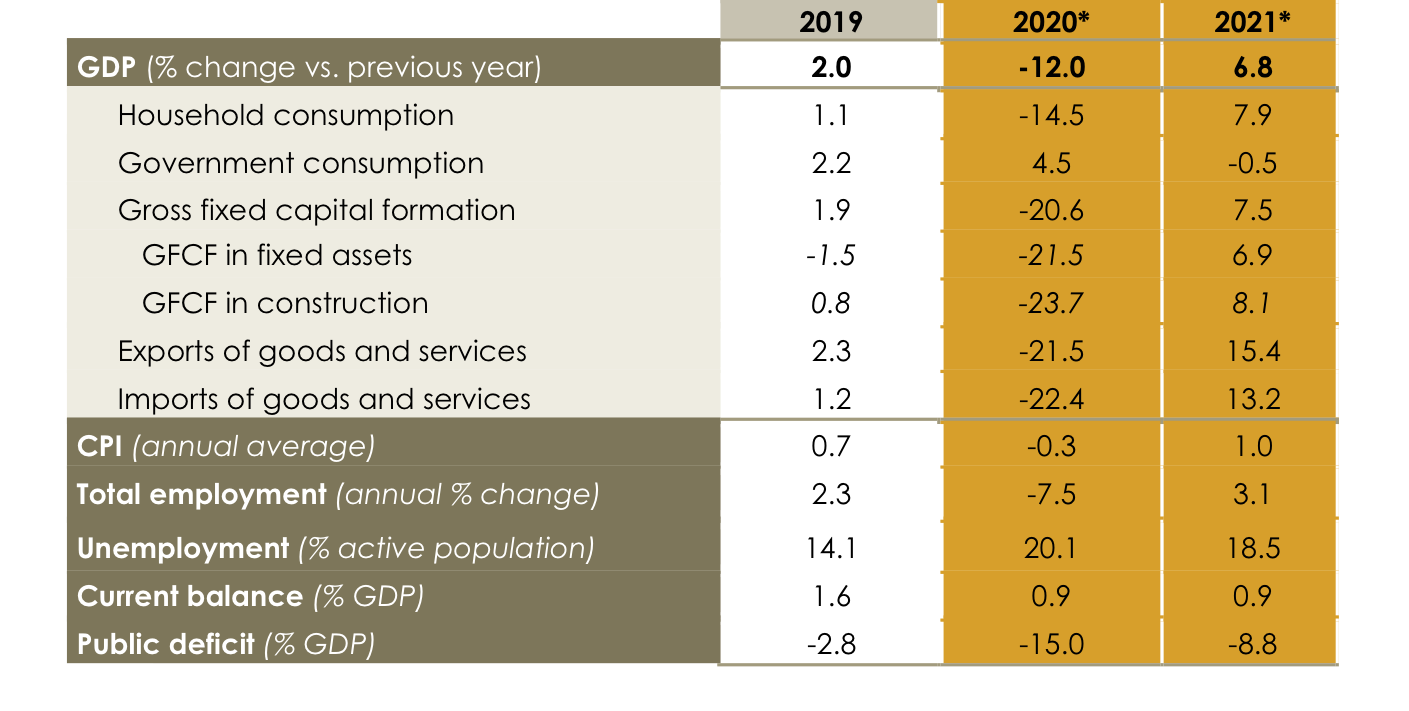 The recession and the set of measures adopted to counteract the effects of the Covid-19 crisis will have a severe effect on the already unbalanced Spanish public accounts. The public deficit could reach a level of around 15.0% of GDP in 2020. During the previous recession, with a much smaller GDP drop, the public deficit increased by thirteen percentage points of GDP between 2007 and 2009. Now, the GDP fall is translating intensely into lower public revenue collection, since it affects those taxes that enjoy a greater collection capacity; personal income tax and VAT (see graphs 1 and 2). Meanwhile, the impact on the expense growth of automatic stabilizers and discretionary measures is proving to be very relevant.

GRAPHS 1 AND 2: OVERALL REDUCTION OF MAIN SPANISH TAX REVENUES (LEFT) AND PERFORMANCE OF THE STATE’S REVENUES AND EXPENDITURES (RIGHT).

The increased deficit, together with the already mounting public debt, point to the urgent need to establish a fiscal consolidation pathway in the medium term, for which it becomes key to enact the General State Budgets for 2021. However, it is even more relevant that the Budgets for next year have the adequate purpose and orientation.

Furthermore, a set of reforms needs to be framed in Spain so that it encourages macroeconomic stability, certainty, and a more flexible and competitive economy, by means of a predictable regulatory framework and close collaboration between both the public and private sectors. It is not the time to roll back past economic reforms. On the contrary, much work remains in areas such as healthcare, education, employability, the digital revolution or sustainability of the pension system and public accounts. The degree of success and effectiveness of economic policy will very much determine the strength of the recovery.