Spain Outlook: how to move forward on the road to recovery? 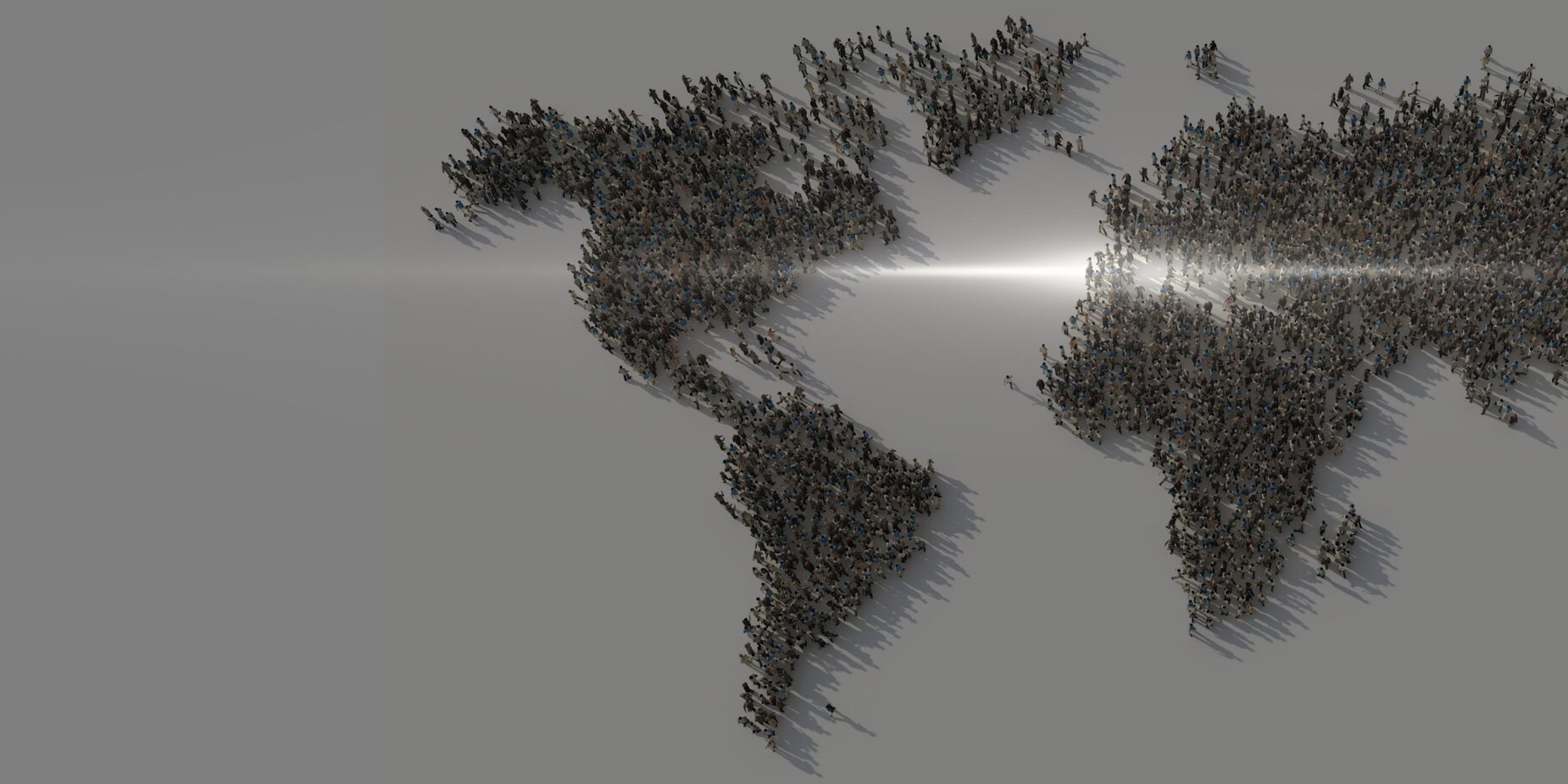 After the unprecedented and generalized fall in global activity last year due to the spread of the Covid-19, 2021 will be the starting point of the economic comeback, which will be uneven across sectors and regions. Despite the rapid spread of the third wave of the pandemic, the start of the vaccination process has given reason for optimism.

Global economic activity in the last months has developed in parallel to the lifting of restrictions, while it enjoys interest rates that remain at historic lows and of mitigation of certain risks -such as a hard Brexit and the increase of US trade protectionist pressures-. As in the Unites States both expansionary monetary and fiscal policies have supported the economy during the collapse and pre-crisis activity levels will be recovered this year, Latin America faces an uphill battle against the pandemic and its consequences, with fewer resources to face it.

Meantime, Europe has been one of the hardest-hit world regions. Unlike in the past crisis, there has been a rapid reaction from the monetary policy side, which has ensured the availability of financial resources across euro economies; however, it has also turned the ECB into a main creditor of public debt. From the fiscal policy side, room for maneuver in the economies’ public accounts has been determinant to tackle the shock with greater or poorer success. More recently, at the supranational level, NGEU funds present a key opportunity to boost green and digital investment and to push forward structural reforms. It is also worthy to note that the Brexit deal avoided an eminently adverse shock over the European economy.

In the latest edition of our report “Ee SPAIN OUTLOOK for Business Strategy”, available upon request, we perform a comprehensive analysis of the current situation and outlook for the Spanish economy in 2021 and 2022.

In the Spanish economy, the GDP fall in 2020 reached 11%, much higher than that of its European partners and that in previous crisis. After the relative upturn in activity in the last quarter, the subsequent contagion waves and adverse meteorological events have slowed the comeback through January and February. Consequently, labor market recovery has stagnated, with nearly 5 million people that are still out of work: unemployed or under temporary work schemes. Economic activity in the Spanish economy has proven, in recent months, more inelastic to lockdown measures than consumption, which remains depressed. See table 1.

TABLE 1. ACTIVITY INDICATORS HAVE PROVEN TO BE MORE INELASTIC TO MOBILITY RESTRICTIONS THAN CONSUMPTION.

The Covid-19 crisis has also had a differential impact and there is an asymmetric trace of recovery among economic sectors: while some sectors showed a more positive development since the start of the pandemic -healthcare, pharma manufacturing, education, renewables-, others were severely affected -air transport, hospitality-. In addition to these short-term effects, their future performance will be influenced by the structural changes derived from the crisis, that are not fully perceptible yet. Until the ‘veil’ created by the ultra-expansionary fiscal and monetary policies, public guarantees, temporary work schemes, and other supporting measures, disappears, the impact of these changes will remain unknown.

In this scenario, at Equipo Económico (Ee) we foresee that over 2021 and 2022 we will witness an incomplete economic recovery, with a rebound for the Spanish GDP set around 6.5% and 3.2%, respectively. From 2023 on, growth will converge towards a muted potential rate. See table 1. The moderation in the pace of recovery and, therefore, in job creation, will mean that, in 2022, 17.2% of active population will still be unemployed, returning therefore to mid-2009 levels. All these projections are subject to a great deal of uncertainty, so they are continuously subject to review.

We also project that the sharp fall in income and increase in public spending will have skyrocketed public deficit in 2020 up to 11.6% of GDP. This imbalance will prevail and remain at 8.8% and 7.9% of GDP in 2021 and 2022, respectively. Likewise, public debt could hit 125% of GDP in 2021, its highest level in recent history. 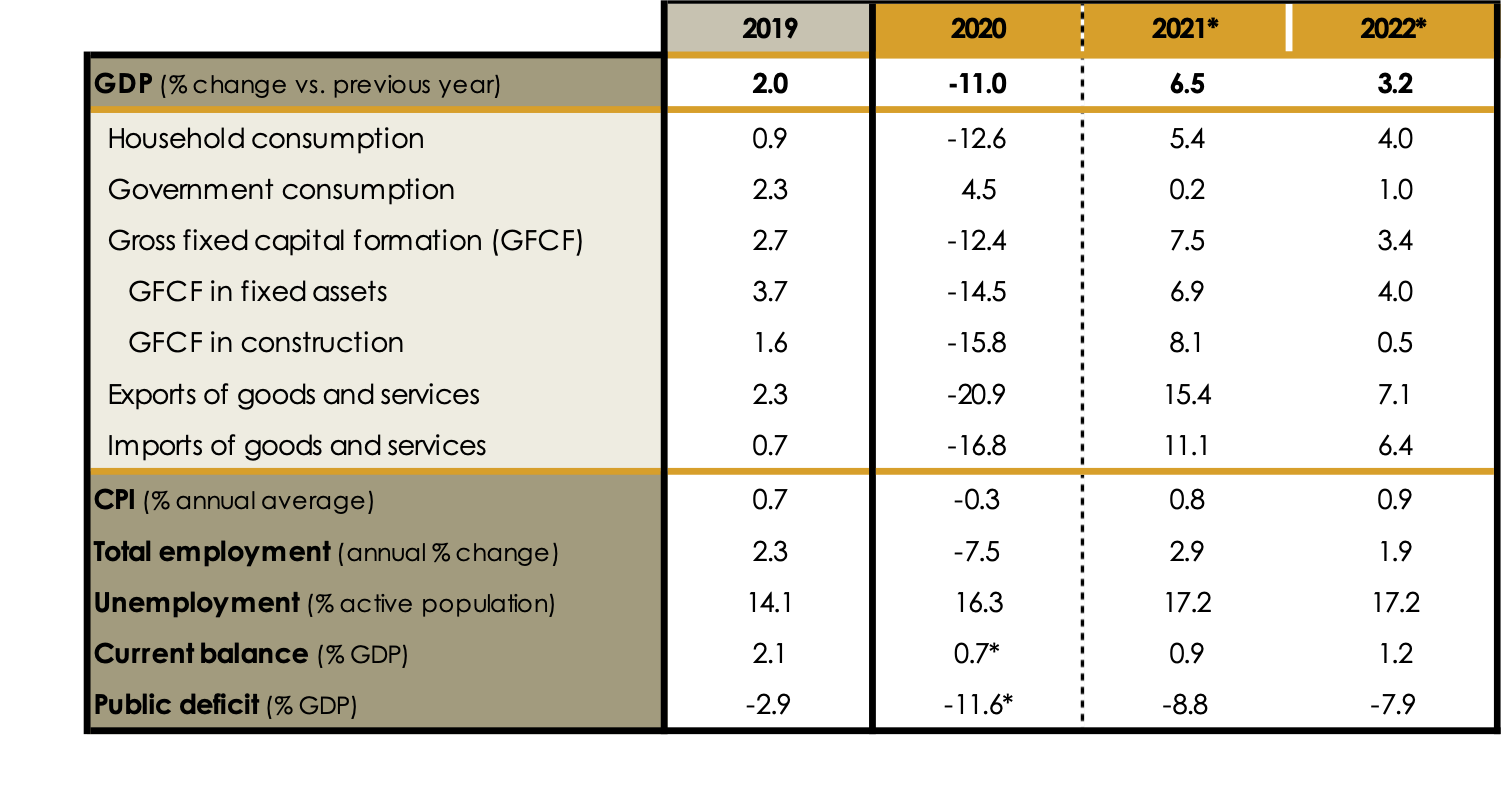 The cornerstones for the recovery of the Spanish economy will be, once again, the strengthening of internationalization process; as well, as it is in this case, the availability of financial resources both for the economy and for businesses; as well as the appropriate use of the new European Funds, that should be destined to productive investment and increasing potential growth. The recovery will face, however, a more indebted economy; additionally, the Central Government has become the main creditor of some regions, creating a probable case of moral hazard.

In the Spanish corporate sector, impact on revenues, results and consequently, indebtedness, has been dramatic. Among the different measures destined to alleviate this situation, we consider that companies should benefit from a €30 billion liquidity injection, as the Spanish public sector has room for improvement, relative to its European partners’ best practices as of commercial debt.

Going forward, the Spanish economy is subject to a set of downward risks of different nature -economic, financial, geopolitical, health and social-, domestic and international, that both the public sector and businesses must consider when drawing up their strategy. 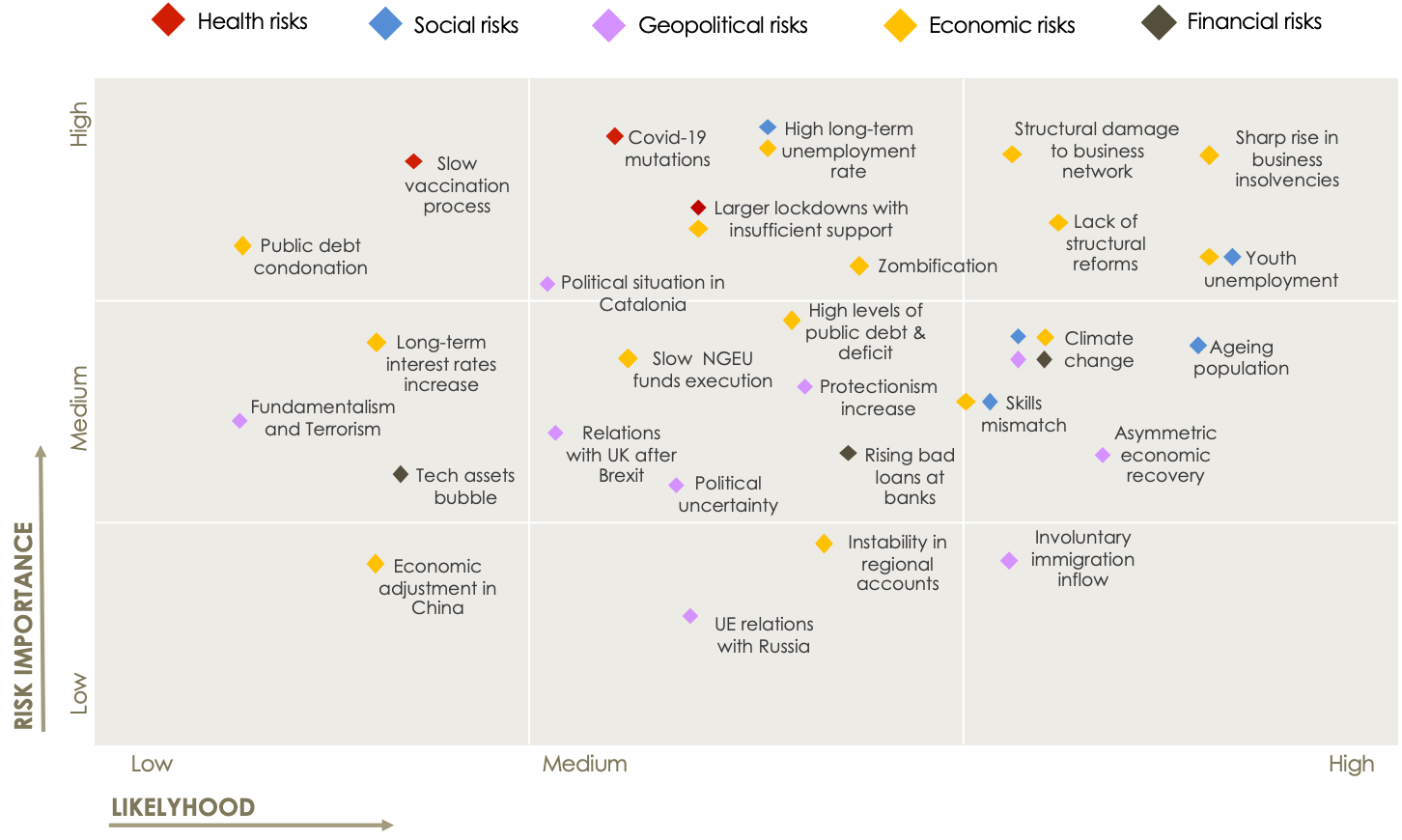 Given the current scenario of an incomplete recovery, there is a need in the short term to provide a clear support to businesses. At the same time, profiting from the conditionality associated with the new European funds and considering the high levels of public indebtedness, it is time to push forward long delayed structural reforms. Even within the new paradigm of a greater role for the state, only an open, flexible, and competitive economy will be able to cope with the serious consequences of the crisis.