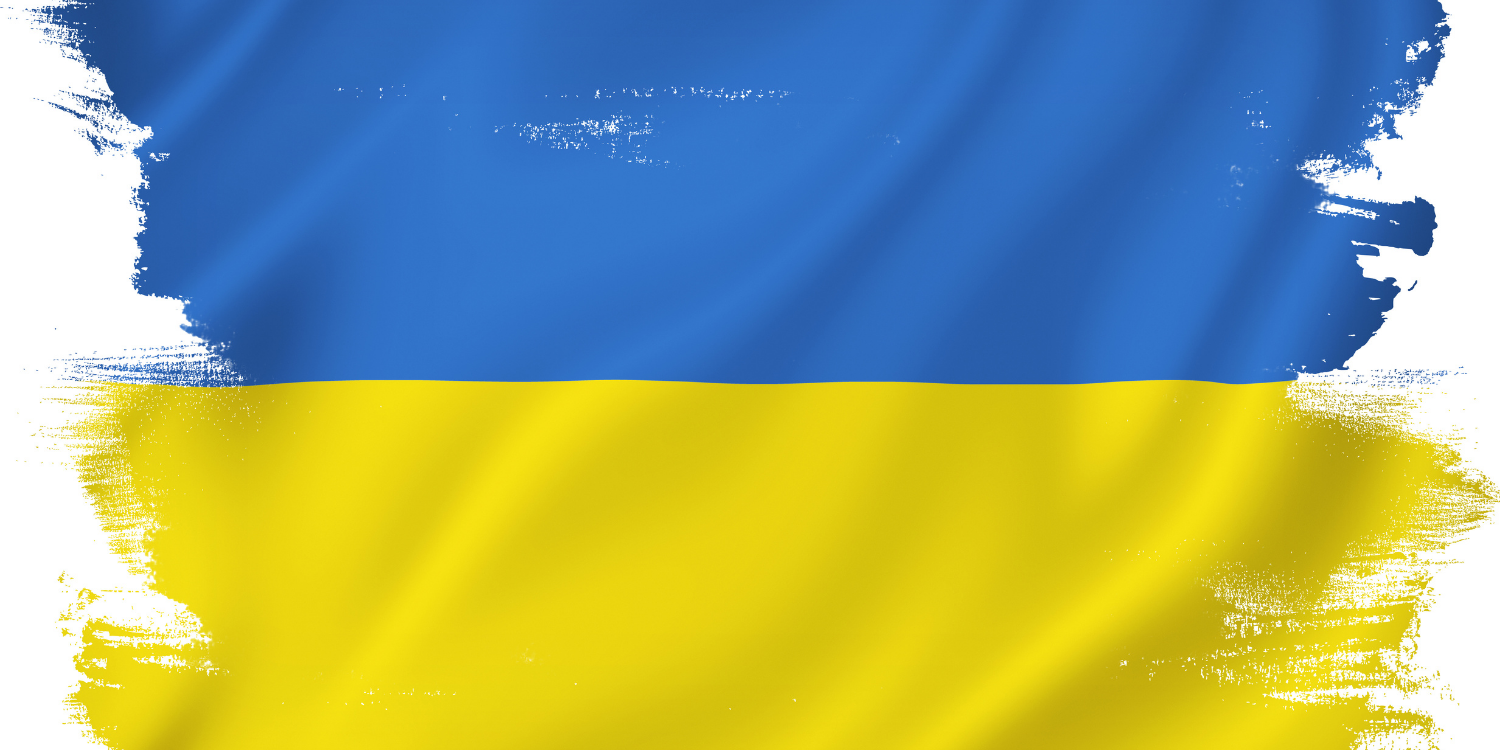 At the start of 2022 most of the world’s regions had already recovered their pre-crisis output. But economic growth was already slowing down, due to inflationary pressures, COVID-19 mutations, and disrupted value chains.

The outbreak of the war Ukraine is now damaging the economic recovery globally, mainly through a supply shock, a drop in demand and even higher energy prices and inflation. The depth of the war’s economic consequences will very much depend on its duration and whether or not it escalates. The base-case scenario we consider is a prolonged conflict between Russia and the West. Russia’s economy is expected to plunge into a deeper recession than the one caused by COVID-19 as a result of western sanctions and the country’s increasing isolation.

In the U.S., economic recovery is confronted with a tight labor market, while inflation is running above the objective of 2%. Thus, the Fed has not change course despite the Ukraine invasion. It has raised interest rates for first time since 2018, and projects six more increases in 2022. As for Latin America, the rebound of activity is hindered by weak labor markets, social unrest, and political instability; most countries in the region expect slower growth this year, but they could benefit from some trade diversion derived from the Ukraine war.

Europe faced an uneven recovery before the outbreak of the armed conflict. Now it is once again facing a war on its continent and is more vulnerable than the other major economies to its economic consequences, due to its closer relations with Russia/Ukraine. As we stress in Chart 1, the war in Ukraine will have a strong asymmetric impact among European countries; the chart represents a Matrix of combined index of EU countries’ economic dependence on Russia and external energy reliance vs. degree of GDP recovery since the COVID-19 crisis, as follows:

On the X-axis, the countries with higher dependency are on the right side. The combined index is based on: 1) The economic dependence on Russia, defined as the average of the followings: share of total exports to Russia, share of total non-energy imports from Russia, share of Russian tourists, and share of FDI in Russia; and 2) the energy dependence, defined as the average of energy dependency rate and share of total energy imports from Russia. On the Y-axis the chart includes the macroeconomic situation in 2021 – their GDP compared to their pre-crisis level –. The ones with higher GDP than in 2019 are at the top.

In the current scenario, those countries in the first quadrant (Denmark, Estonia, Ireland, etc.) should be less affected economically by the Ukraine war: they are in a better macroeconomic position, and they do not rely much on energy imports and on Russia. On the other side, those in the fourth square (Germany, Italy, Spain, Slovakia, etc.) will be worse off.

CHART 1 – Matrix of combined index of EU countries’ economic dependence on Russia and external energy reliance vs. Degree of GDP recovery since the covid-19 crisis. 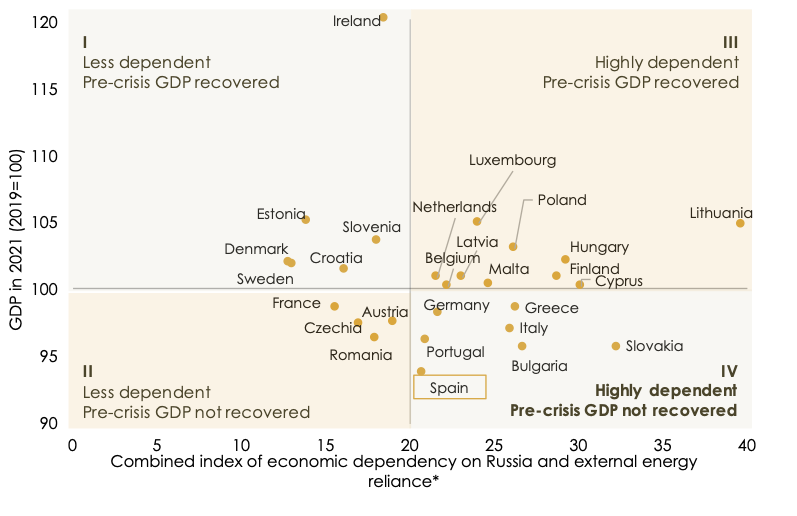 This will require rethinking economic policy and adapting it to wartime. In a context of an even higher outlook for inflation and downward shifts in economic growth due to the war, the ECB has taken the decision to scale back its stimulus plan but is postponing an interest rates hike. There will be a time lag in rate hikes between the ECB and the Fed. On the fiscal side, the outbreak of war in Ukraine has occurred at a time when European countries are experiencing a wide divergence in the state of their public accounts. But EU budget rules will continue to be on hold. Once again, the EU will need a common financial instrument to finance the asymmetric consequences in member states.

In Spain, the economic recovery was robust in 2021 but weaker than expected. Global supply shortages and COVID-19 restrictions limited exports. Spain has not been exempted from inflationary pressures -CPI growth in February has attained record levels since 1989-, which are starting to seep into most sectors of the economy. All this contributed for tax revenues to attain pre-crisis levels in 2021. However, due to still increasing public spending, public debt levels reached a record in Q3 of 121.8% of GDP. Nevertheless, the economy enjoyed a net lending capacity abroad.

Activity and consumption indicators revealed a generalized slowdown in January 2022 that was starting to ease in February 2022. On the labor market, the pace of job creation remains intense, with a relevant nudge by the public sector.

Now, neither the most favorable scenario expected this year related to the COVID-19 pandemic, the expected better performance of relevant sectors for the Spanish economy in 2022 -such as tourism-, nor the increase in public spending and investments will be able to offset the economic effects of the Ukraine war. In this context, at Equipo Económico (Ee), we foresee an economic slowdown in Spain; we have conducted a downward revision of our forecasts since our last edition, we now expect an annual GDP growth at 4.6% and 3.5% in 2022 and 2023, respectively. See table 1.

NGEU funds are a key opportunity in the medium term to boost economic recovery by means of financing structural transformation of European economies. But the boost in investment in 2022 and 2023 from the execution of programs financed with NGEU funds will be less than initially expected, given the slow execution and the governmental attention that the outbreak of war in Ukraine will require.

We consider annual average CPI will grow at 7.8% and 3.2% in 2022 and 2023, respectively. Depending on the scenario for the conflict, inflation could attain double-digit levels in H1 2022. Therefore, we expect to have higher inflation rates than growth rates, as occurred in previous crises. CPI growth will only begin to moderate at the end of 2022, converging in 2023 towards the 2% target set by the ECB. All under the assumption that there are no second-round effects. 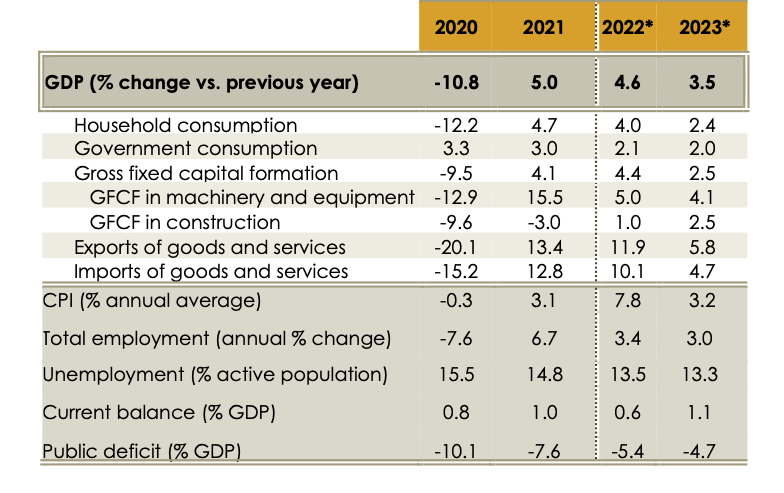 All these insights and perspectives are subject to a set of downward risks, both domestic and international, among the which we highlight the escalation of the Ukraine-Russia war, COVID- 19 mutations, and inflation persistence. In order to tackle these risks, a consistent framework is required to steer economic policies over time.